Email your support questions to:

A portable nuclear gauge uses very small amounts of radioactive material, Cesium 137 and Americium 241, to produce just enough radiation to measure the density of soils and asphalt. They measure the compaction density of foundations under buildings and roadways as well as the compaction of newly laid asphalt. Without proper compaction our infrastructure, including building, bridge and roadway foundations, would frequently fail, resulting in increased construction costs, traffic delays and accidents.

The radioactive source material is bonded into a ceramic pellet that is the size of a small pebble. The sources are contained in laser-fused, double encapsulated steel housings that make them virtually impenetrable and indestructible. They must pass extensive testing under the inspection of the International Atomic Energy Agency (IAEA). The bonded material is not subject to leaking, oozing, melting or powdering. The steel canisters are further shielded inside the gauge’s steel source rod and surrounded by lead and tungsten bio-shields.

Although there have been catastrophic incidents where gauges have been demolished by tractor-trailers and heavy construction equipment, or melted down in fires, there has never been an instance where the damage has compromised the shielding to the point that contamination was released or caused harm to anyone.

Gauges do get stolen but typically the thief is after the vehicle that transports the gauge or they have mistaken the gauge for a conventional power tool. Gauges are typically recovered in short order.

How the Gauge Uses Radiation to Measure Density and Moisture

An 8 millicurie Cesium 137 source used to measure density resides at the tip of the gauge’s source rod. It is housed and surrounded by shielding inside the gauge. When in use the rod is lowered into the ground at a specified depth, but no deeper than 12 inches. Radiation emitted by the radioactive material passes through the soil and is either absorbed/stopped by the soil or makes its way to the detector tubes on the other side of the gauge. Density is determined by the amount of radiation that is able to pass through the soil.

A fixed 40 millicurie Americium 241 source used to measure moisture content resides inside the base of the gauge. The radiation from this source is emitted into the ground, determines hydrogen content (a key ingredient of moisture), and reflects back up to a detector tube in the gauge.

Users of portable nuclear gauges must receive initial and on-going safety and security training to maintain their certification for using these devices. Although the annual radiation exposure limit allowed when working around these gauge is 5000 millirem (5rem), in reality, a worker will typically receive far less than 100 millirem in a year. To put that amount in perspective, the average U.S. citizen receives about 360 millirem in natural background radiation during the same timeframe.

Portable Nuclear Gauges in the Age of Terrorism

Gauge licensees are well trained in operating and emergency procedures and do everything possible to reduce the number of thefts and damaged gauges. Strict adherence to safety and security regulations are used to meet this goal. 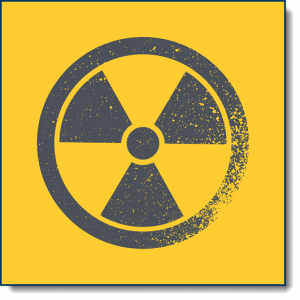 In order to better inform the public on what a dirty bomb is and what terrorists might intend to try to accomplish in setting off such a weapon, the following information is provided. Given the scores of exercises–federal, state and local–being staged to assure that all emergency response organizations are properly equipped, trained and exercised to respond to terrorist chemical, biological or radiological attack, we believe members of the public, as well as news organizations, will value some concise, straightforward information.

Basically, the principal type of dirty bomb, or Radiological Dispersal Device (RDD), combines a conventional explosive, such as dynamite, with radioactive material. In most instances, the conventional explosive itself would have more immediate lethality than the radioactive material. At the levels created by most probable sources, not enough radiation would be present in a dirty bomb to kill people or cause severe illness. For example, most radioactive material employed in hospitals for diagnosis or treatment of cancer is sufficiently benign that about 100,000 patients a day are released with this material in their bodies.

However, certain other radioactive materials, dispersed in the air, could contaminate up to several city blocks, creating fear and possibly panic and requiring potentially costly cleanup. Prompt, accurate, non-emotional public information might prevent the panic sought by terrorists.

A second type of RDD might involve a powerful radioactive source hidden in a public place, such as a trash receptacle in a busy train or subway station, where people passing close to the source might get a significant dose of radiation.

Impact of a Dirty Bomb

The extent of local contamination would depend on a number of factors, including the size of the explosive, the amount and type of radioactive material used, and weather conditions. Prompt detectability of the kind of radioactive material employed would greatly assist local authorities in advising the community on protective measures, such as quickly leaving the immediate area, or going inside until being further advised. Subsequent decontamination of the affected area could involve considerable time and expense.

NRC and state regulations require licensees to secure radioactive material from theft and unauthorized access. These measures have been stiffened since the attacks of September 11, 2001. Licensees must promptly report lost or stolen material. Local authorities make a determined effort to find and retrieve such sources. Most reports of lost or stolen material involve small or short-lived radioactive sources not useful for an RDD.

What is nuclear radiation?

Radiation is a form of energy. The radiation of concern here is called ionizing radiation. Atoms release radiation as they change from unstable, energized forms to more stable forms.

What is a radionuclide?

What are the types of radiation?

Alpha particles can travel only a few inches in the air and lose their energy almost as soon as they collide with anything. They are easily shielded by a sheet of paper or the outer layer of a person’s skin. Alpha particles are hazardous only when they are inhaled or swallowed.

Gamma rays are waves of pure energy and are similar to x-rays. They travel at the speed of light through air or open spaces. Concrete, lead, or steel must be used to block gamma rays. Gamma rays can present an extreme external hazard.

Neutrons are small particles that have no electrical charge. They can travel long distances in air and are released during nuclear fission. Water or concrete offer the best shielding against neutrons. Like gamma rays, neutrons can present an extreme external hazard.

Radiation is measured in different ways. Measurements used in the United States include the following (the internationally used equivalent unit of measurement follows in parenthesis):

Rad (radiation absorbed dose) measures the amount of energy actually absorbed by a material, such as human tissue (Gray=100 rads).

Roentgen is a measure of exposure; it describes the amount of radiation energy, in the form of gamma or x-rays, in the air.

Curie is a unit of radioactivity. One curie refers to the amount of any radionuclide that undergoes 37 billion atomic transformations a second. A nanocurie is one one-billionth of a curie (37 Becquerel = 1 nanocurie).

What levels of radiation are people exposed to in everyday life?

it helps to be aware of the radiation levels people encounter in everyday life. Individual exposures vary, but humans are exposed routinely to radiation from both natural sources, such as cosmic rays from the sun and indoor radon, and from manufactured sources, such as televisions and medical x-rays. Even the human body contains natural radioactive elements.

Because individual human exposures to radiation are usually small, the millirem (one one-thousandth of a rem) is generally used to express the doses humans receive. The following table shows average radiation doses from several common sources of human exposure. 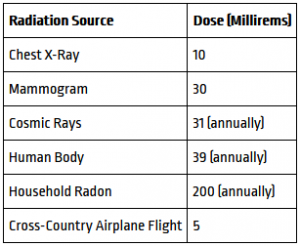 Are there any legal limits for radiation exposure?

Another way to help put a radiological emergency into perspective is to be aware of the radiation exposure limits for people who work with and around radioactive materials full time, as shown in the following table:

What are radiation’s effects on humans?

Radiation effects fall into two broad categories: deterministic and stochastic. At the cellular level, high doses of ionizing radiation can result in severe dysfunction, even death, of cells. At the organ level, if a sufficient number of cells are so affected, the function of the organ is impaired. Such effects are called “deterministic.”  Deterministic effects have definite threshold doses, which means that the effect is not seen until the absorbed dose is greater than a certain level. Once above that threshold level, the severity of the effect increases with dose. Also, deterministic effects are usually manifested soon after exposure. Examples of such effects include radiation skin burning, blood count effects, and cataracts.

In contrast, stochastic effects are caused by more subtle radiation-induced cellular changes (usually DNA mutations) that are random in nature and have no threshold dose. The probability of such effects increases with dose, but the severity does not. Cancer is the only observed clinical manifestation of radiation-induced stochastic effects. Not only is the severity independent of dose, but also, there is a substantial delay between the time of exposure and the appearance of the cancer, ranging from several years for leukemia to decades for solid tumors. Cancer can result from some DNA changes in the somatic cells of the body, but radiation can also damage the germ cells (ova and sperm) to produce hereditary effects. These are also classified as stochastic; however, clinical manifestations of such effects have not been observed in humans at a statistically significant level. (Source: Los Alamos Science, No. 23, 1995)

Further information can be obtained via the following sources:  the state regulatory agency, nrc.gov ,apnga.com , or the gauge manufacturer’s website.

The solution to this problem is very SIMPLE.  To fix these issues and allow us to provide the support you need, please have whoever manages your company’s mail server policies (mail rules) whitelist emails from Support@APNGA.com and Admin@APNGA.com as “safe senders”.   These emails will routinely come from IP Address 35.209.33.172 .

APNGA cannot change the outgoing format of our emails to cater to your specific company.   We serve hundreds of companies, and what is “acceptable format” for one company will just as easily be “not acceptable” to another company’s rules.  Therefore, to receive the important emails cited above, the only way to fix the problem is to simply whitelist APNGA emails.